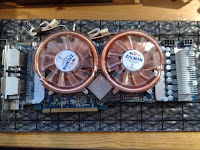 So recently I was lucky enough to recieve a 4850X2 and as happy that I was to get it, I couldn't help but notice that it is just to noisy for my nice and quiet build.

After much research and a small thought that I would be voiding my warrenty I thought I'd venture into making it queiter. The only problem being that the lack of aftermarket coolers for this card ment that it would not be an easy ride.

The major problem with finding alternative cooling for this card is the proximity of the two R700 cores being so close. This greatly reduces the number of coolers available.

After a bit of browsing and seeing good results with a single GPU, HD 4850 I thought I'd give two Zalman VF900-Cu LED a try. 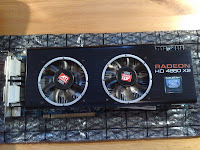 After first removing the 8 small screws surrounding the fan the outer shrowd will lift off. 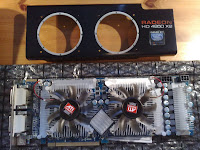 Next remove the rear 8 screws securing the heatsink to the card. 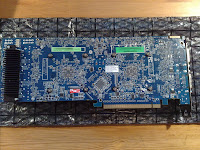 The two Heat sinks will then lift off and the fan plugs can be removed. 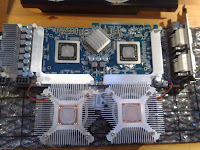 I then cleaned the top of the two GPUs. 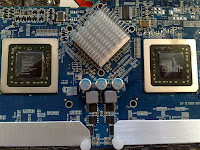 And did a dry fit to make sure that the two VF900-Cu would fit onto the card. 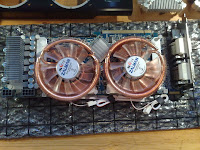 Apply the thermal paste, I chose to use Thermaltake's TG-1, mainly because that's what I had to hand, and it's always served me well. 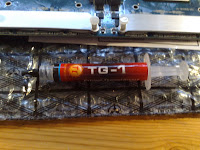 Tighten the new coolers to the card 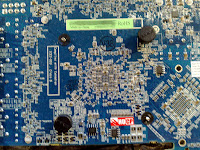 And we're all finished! 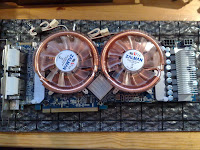 To test the temperatures of my card I used GPU-Z 0.3.1 and to simulate full system load I used Orthos to load the CPU and GPU Caps Viewer to load the Graphics card using the built in furmark at 1680x1050 and 8X MSAA.

I performed all the tests for 10 minutes waiting for the GPU temperature to fall to the idle temperature before the next test was started.

It should be noted that at the time of testing the ambient room temperature was 20deg C.

So here are the results; 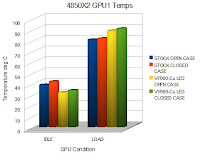 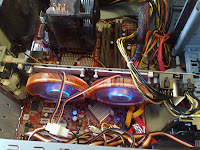 First off it should be noted that the Zalman coolers are, to my ears a lot queiter at 100% than the Stock cooler at idle.

That said, you can see the Zalman coolers offer a lower idle temperature, but unfortunatly they don't cool so well at full bore, and short of under clocking the GPUs there is no way that they can be used for extensive periods of time.

For this reason the Sapphire heat sink has been put on, but this will not be the last time I will attempt to queiten my lovely new graphics card.
Newer Post Older Post Home